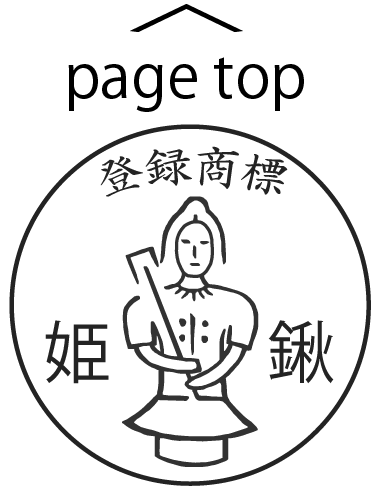 The legend goes that in 1589 Lord Ashina Yoshihiro, the castellan of Aizu Clan then,
lost in the battle of Suriagehara, and ran to the land of Hitachi. Princess
Tsugu, however, left behind along with one of chief counselors, Tomita
Ukon, together went into hiding. Under pretense of being a farmer’s daughter,
the princess had to take up a heavy hoe for tillage.

Unable to keep witnessing the noble girl’s plight, the counselor secretly visited
Kanesada, a swordsmith of the former lord, and asked the smith to make an
exceptionally lightweight hoe for the princess. Kanesada applied sword-making skill to a farming tool, and thus created a splendid hoe, the fruit of his effort and soul being breathed into it.

The following year, a new lord Gamo Ujisato was appointed to govern the Aizu

territory. Later, when the Lord Gamo was presented with a case that contained the
hoe, he learned the occurrence and exulted at the story. As a token of his extolment, the lord dipped one hair brush into black ink and wrote a few words, with a lively
stroke, on the lid of the container. The words read, “an agri-treasure, Princess Hoe.”